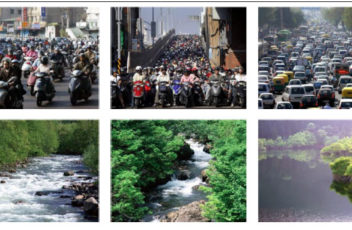 The more we know about the interactions between the landscape and human nervous system the better we can plan and design our living environments to serve our health.

With water being the essential component of any form of life, it is not surprising that it also influence our psychophysiological response, even if we are just passively exposed to it.  But what kind of water feature, and what do we have to do with this water to achieve this response? This is a question that scientists (NeuroLandscape included) have been trying to answer.

Let’s concentrate on the river. According to Jungian dream analysis, based on his theory of collective unconscious, the river is a symbol of death and rebirth (baptism), the flowing of time into eternity, transitional phases of the life cycle, and incarnations of deities. In Dr. Agnieszka Olszewska-Guizzo’s research river is one of the archetypal elements making the landscape “contemplative” and therefore therapeutical.

In the fMRI study from 2017 the team of Prof Chang, Chun-Yen (National Taiwan University) discovered that the passive exposure to the river views alters the brain functioning significantly, when compared to the urban views (see the image above). The brain activity related to the “urban versus water ” contract was located in the left and right cuneus (Fig. 5).
The cuneus is primarily known for its involvement in basic visual processing. Furthermore, the right cingulate gyrus and left precuneus were also activated. These regions, which are part of Brodmann area 31 (BA31) and known as the dorsal
posterior cingulate cortex, are assumed to influence the focus of attention by adjusting whole-brain metastability (Leech & Sharp, 2014).   – Tang et.al 2017

It looks like there is nothing better for our nerves fatigues from all day in the office or and after several hours commuting through the urban jungle than walk along the riverfront immersing with our senses into the soothing flow of the waters. 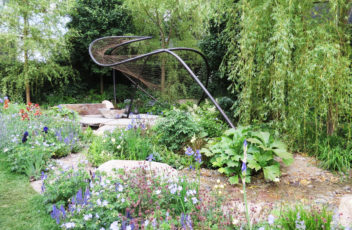 These three very special gardens of the Chelseas Flower Show 2018, were featured this year on the NeuroLandscape blog:

They are a great source of information and inspiration on how to create healthy space through the landscape design, right selection of plants, materials, textures and shapes. This year, the dominant color palette were  definitely different shades of purple. This colour has a powerful impact not only on our mood but also behaviors. It calms and soothes, silences and regenerates the nervous system, enhances creativity and spirituality. It’s best for relaxation. Blues and greens create a calming atmosphere as well. As a landscape architect, through  visiting this year’s Chelsea gardens I got inspired by some design strategies to create a space that has a positive effect on our well-being and mental health: I am very glad that such prestigious show like Chelsea provides people a great opportunity to explore solutions to some of the actual most pressing not only environmental but also social and economic challenges. This year’s gardens are great, healthy places that make people feel very comfortable and at ease, offer spaces that increase social interaction, reduce stress, antisocial behavior and isolation. Luckily, the community awareness of how the public health can be enhanced by increasing access to green and blue space and improving the quality of our natural environment is a growing trend.

We are more and more involved in issues related to green areas in places where we live, ready to fight for better, greener cities to live in and enjoy in the harmony with nature. We look to the future with hope that it will be possible to prevent or slow down the progress of many diseases related to our mental health, looking beyond traditional treatments and medicines, through a range of activities, including gardening and spending time in a high quality, healthy and sustainable green spaces.